New York City in 5 Days  – First of all enjoying everything New York City has to offer during a 5 day trip is a challenge because there is so much to do. Whether your sightseeing, shopping, dining, taking in a show or visiting museums I hope this five day itinerary helps guide you on your next trip to New York.

How do I pick a restaurant in New York with so many options?

My wife & I were told that New York City has over 24,000 eating establishments, which includes takeaways, delis, cafes and the like. After doing research online we set up our Best 5 day Itinerary in New York City around restaurants we wanted to visit. Since we are foodies and willing to spend money on good eats I researched the restaurants and then mapped out the different sights or things to do in the neighborhoods. Hence, saving us time by sticking to one section of Manhattan each day. Checked in to Archer Hotel: New York
The Archer Hotel New York is a newer boutique hotel that is located in Midtown’s Garment District neighborhood. Above all the hotel’s staff was very friendly and willing to help you with questions about NYC and getting around Manhattan. Our room while small had a comfy king size bed and modern bathroom. Booking Tip: Request a higher floor room with a view of the Empire State Building. Here’s the TripAdvisor link: Archer Hotel

Time to get our NYC foodie experience on

First Stop: Spotted Pig (Best Burger in New York City)
April Bloomfield’s gastropub The Spotted Pig in the West Village for her Roquefort burger & shoestring fries. Cost was $26 a bit shocking for a Minnesotan. Plus we ordered her pickle plate to cut some of the fatness of the burger and fries. Yes, I’d say it was worth the price tag. My wife and I split the burger which was perfect for lunch. Loved the interior and ambiance of this small West Village pub.

Happy Hour at Buddakan
Lavishly decorated Asian restaurant in the Chelsea Market building. We order a few cocktails and the edamame dumplings. It’s certainly worth a look if your into interior design and a restaurant with ambiance. Photos on their website.

Fireworks on East River for 4th of July Celebration
https://www.macys.com/social/fireworks

Rooftop Drinks in NYC – Midtown
Post firework drinks at Spyglass Rooftop Bar in our hotel – great views of the Empire State building that was light up in red, white and blue to honor independence. Another option near by for city views is Refinery Rooftop. I’d certainly find a place with great views amongst the many rooftop restaurants and bars in New York City. New park in the Big Apple: The High Line

The High Line is a 1.45-mile-long elevated linear park, greenway and rail trail. It was created on a former New York Central Railroad spur on the west side of Manhattan in New York City.

After we went to the National September 11 Memorial & Museum
The 9/11 Memorial Museum documents the impact of 9/11 events and continuing significance.

Dinner and a laugh

Dinner at Cote Korean Steakhouse
Cook your own dry-aged steaks on tabletop gas grills or let the wait staff help you. Order the butcher’s feast ($48 per person) which includes four selected cuts with Korean accompaniments. Overall we had a great experience, loved the food and thought the price was reasonable because of the quality beef and amount of sides you get.

New York Comedy Club
New York Comedy Club has been serving up the best comedy in the city since 1989. Cost $25 each, plus a 2 drink minimum. It’s certainly worth checking out one of the many great comedy clubs while your in New York. Two other options include: Gotham Comedy Club or Comedy Cellar. 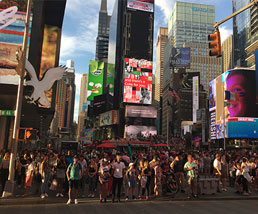 We hit up Russ & Daughters shop for bagels and lox. My wife ordered a bagel with goat cream cheese and I had the everything bagel with smoked salmon, cream cheese, onion, tomato and cappers. With 2 coffees and 1 bottle of water the tab was $25.

After we took a walk down the South Seaport walkway and under the Brooklyn Bridge.

The Splurge: Lunch at Le Bernardin by Eric Ripert

My review of Le Bernardin: We ordered the 3 course chef lunch menu. My wife started with the lobster with truffle sauce and loved it – two of her favorite things on one plate. I ordered the scallop “barley cooked” with sea beans in a bonito butter sauce. For my second course I had the Snapper in Veggie Ceviche with a Shrimp Mezcal Marinière sauce. I was disappointed that the snapper didn’t come with one side of crispy skin on it because whole fried snapper is one of my favorite dishes. Overall we were happy with the experience. Call it a splurge, don’t try to justify the price vs. food or drink and you’ll be happy.

We looked into booking a reservation at Eleven Madison Park, but it was booked solid.

The Frick Collection after lunch

The Frick Collection is an art museum located in the Henry Clay Frick House on the Upper East Side in at 1 East 70th St. Cost per adult ticket $22.

What makes the Frick special is the priceless artwork is hanging in the Frick House which is a 18th-century French-style mansion. Tip: Make sure you do the self-guided audio tour

School of Rock is a musical with music by Andrew Lloyd Webber at the Winter Garden Theatre. We bought the 50% discount tickets which cost $89 each. It was fun and entertaining.

Walked through Time Square after the show – a compete madhouse! Avoid it if your don’t like crowds. Ducked down a street to B Side Pizza & Wine Bar. Had a couple of Brooklyn lagers and a Spicoli pizza (tomato, mozzarella, roasted mushrooms, caramelized onions, parmesan, $16). With only a couple other tables it was a nice way to end the evening. Had the Classic egg sandwich (fried egg, crispy bacon, American cheese, tomato, fried shallots, spicy aioli) at Egghead for breakfast and walked to Bryant Park, took in a few free exhibits at the New York Public Library which was constructed in 1897 and Grand Central Terminal a world-famous landmark. If your hungry and like oysters stop by Grand Central Oyster Bar serving raw oysters, pan roasts & chowders for over 100 years.

Late Lunch at Peter Lugers – Established 1887
Note: Cash only & reservations by phone (Cost $$$$)
Peter Luger Steak House is located in Williamsburg Brooklyn has been named the best New York steakhouse by many food critics and foodies alike. We ordered the Cobb salad with their famous bacon and Steak for 2 which is Dry aged USDA Prime Beef. It’s a Porterhouse steak (one side is the New York Strip and other side is tenderloin) in my opinion it’s the best steak cut! The steak for two was more than enough food. Skip the sides!

A recipe I’ve used to make Porterhouse steaks at home in my cast iron skillet.

Smorgasbord is a free open-air food market in Brooklyn that happens on the weekends. You can choose from over 100 local vendors great views of the city from Prospect Park in Williamsburg (11am-6pm).

We booked a Harbor Lights Cruise that takes you down the Hudson river and around Manhattan for a sunset cruise. You’ll see the Statue of Liberty and beautiful NYC skyline in all their glory from the Upper bay. We ended up buying the Premier tickets for $55 each, which gave us advance boarding with a food & beverages server.

A taste of Bangkok in New York Must foodie stop in NYC: Katz’s

We ate Sunday Brunch at Katz’s Delicatessen
Order the legendary pastrami sandwich. Which we shared, with drinks cost $35.

Central Park – took a stroll in the park

Sights & Things to Do NYC (in no particular order)

The 38 Essential Restaurants in New York City, 2018 with Map
https://ny.eater.com/maps/best-new-york-restaurants-38-map

Domenico DeMarco has been making pizzas at Brooklyn’s famous Di Fara Pizza since 1965. Corey Gasman is a freelance website designer and small business owner with over 25 years of experience in web design and graphic design.

Over the years he’s become an expert in everything web: WordPress, Online Strategy, SEO, Social Media, Security and much, much more.

Corey’s mission is to help startups, entrepreneurs, small businesses and corporations build a professional looking website based on proven strategy and a knowledge of what works.

With a passion for travel he’s sprinkled in a few Travel Blogs. In 2004-2005 he took a gap year to travel around world to 26 different countries.